Researchers used AFM techniques to measure the nanoscale structure and mechanical properties of virus-like particles. The results add to our understanding of how such particles could be used as a vaccine for the hepatitis C virus. Although infection by the hepatitis C virus (HCV) can result in chronic liver disease, cancer, and even death, no approved vaccine for it currently exists. Noninfectious, self-assembling constructs called virus-like particles (VLPs) are promising candidates for an HCV vaccine. However, more information about their biophysical, biomechanical, and biochemical properties is needed to guide research.

The sub-200 nm size of HCV VLPs makes them difficult to characterize with traditional tools such as light microscopy and X rays. Therefore, a team of researchers at RMIT University and other Australian institutes demonstrated the power of AFM to evaluate biomolecules such as VLPs. 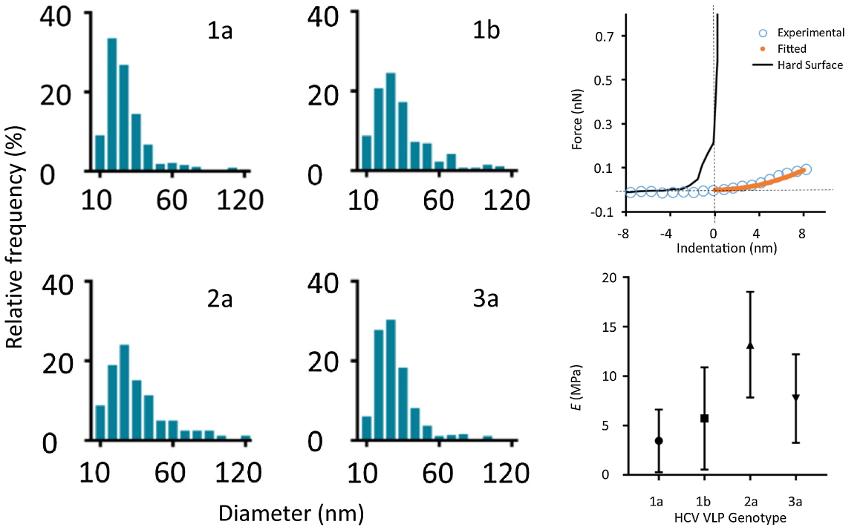 By improving our fundamental understanding of these nanoscale particles, the results could advance efforts to develop an effective vaccine for hepatitis C.

Topography images with scan widths as small as 100 nm were acquired in a droplet of buffer solution in small-amplitude tapping mode on the Cypher ES AFM. In addition, over 100 force curves were acquired on single, intact VLPs of each type. In both cases, measurement repeatability was enhanced by the ES’s sealed cell, which minimized buffer evaporation and temperature fluctuations. The high spatial resolution, ultralow noise floor, and high force sensitivity of Cypher AFMs further ensured high measurement precision and accuracy. Built-in software for force curve analysis streamlined calculations of elastic (Young’s) modulus.

Note: The data shown here are reused under fair use from the original article, which can be accessed through the article link above.